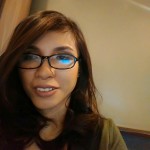 The first thing that came into my mind whenever I saw photos of ramen on Instagram: famous Japanese food. Few weeks ago, I was invited to try out a ramen restaurant called Go-En which located near ABS-CBN. Upon entering the place, I was greeted by the one of the owners, John Goren.  The ambiance brought me to the ancient Japan. Fond of everything Japanese, I was delighted to learn how to play traditional Japanese toy called Kendama and if you visit this quaint place, you can read a wide array of Manga while waiting for your orders. Go-En Ramen Shoppe founded in 2012 by John Geron and Marilyn Pefianco. Go-en coin used to symbolize either 5 yen or good luck in relationships.

Our group got a chance to try on different kinds of ramen such as Tantamen (one of my favorites among the meals that served during that afternoon), Karaage, Wonton Tomato, and Kara-age Kare. They also served the spicy version of some of the ramens that day. I like how they presented it and the price is affordable. If you love ramen, I recommend you to try their meals such as Cheese Ramen, Karamiso, Tonkatsu, and Gyoza. You can check out Go-En’s official website or visit them at Jardin de Zenaida, Unit B1 #34 Sgt. Esguerra Ave.Brgy. South Triangle, Quezon City.